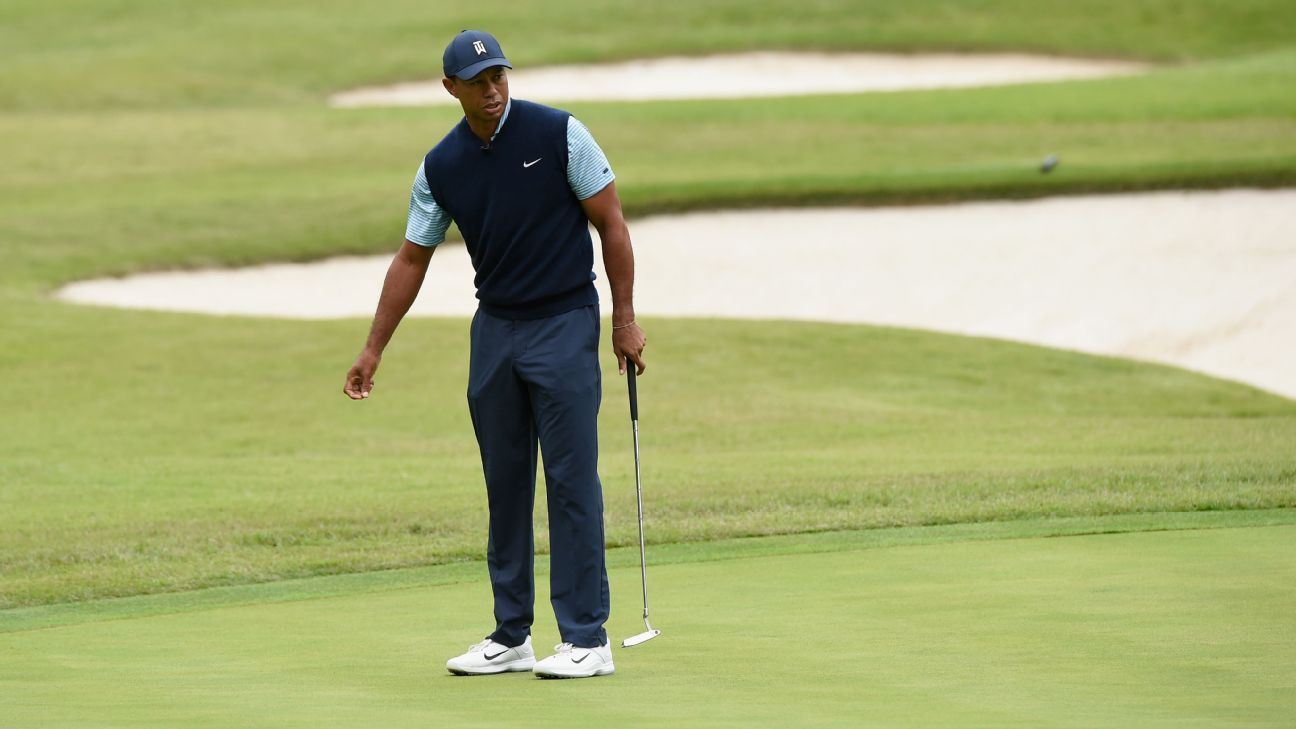 CHIBA, Japan — A journey to the other side of the world for Tiger Woods is yet another reminder of how he leads a different life than the rest of us and that trips such as this one involve far more than playing golf.

Woods arrived in Japan on Friday, ostensibly to get acclimated to a 13-hour time change as well as get in some work at a golf course he had never seen in advance of Monday’s The Challenge: Japan Skins event and this week’s Zozo Championship — his first competitive golf in nine weeks.

But due to the recent typhoon that hit Japan, Accordia Golf Narashino Country Club was closed over the weekend because of wet conditions. All he could do was hit balls Saturday on the driving range with caddie Joe LaCava, who was not even permitted to walk the course to chart yardages and walk off greens.

The only golf Woods got in Sunday was part of a clinic he gave at a Nike-sponsored event in Tokyo — likely part of the reason he decided to sign up for the first PGA Tour event ever in Japan. Mixing business in and around his golf schedule has been part of Woods’ existence since he signed a multimillion-dollar deal with Nike in 1996 before hitting a shot as a pro.

Of course, all of this makes the task of preparing to play tournament golf that much more challenging for Woods, whose well-chronicled back woes hover like humidity, with the added issue of overcoming a fifth knee procedure two months ago.

So expectations should be tempered this week at the Zozo Championship. Woods admitted as much in a brief interview Monday after the event with Rory McIlroy, Jason Day and Hideki Matsuyama. Woods looked rusty on his way to earning five skins in the competition won by Day.

“It’s always been that way whenever I’ve had one of these layoffs,” Woods said. “It was nice to get out there and compete. To get back in the flow of things. My range of motion, my strength, is there again. I just have to work my way back and hope I find a feel for the round quickly.”

There was a time when long breaks hardly impacted Woods. He’d take weeks off, and come back and win again. He’d show up at Torrey Pines following a lengthy break and perform like he’d been playing and practicing all along.

Physical woes in recent years have made that extremely difficult. The demands that come with being Tiger Woods — father, golf course designer, endorser, foundation head, golfer — add more diversions. And Woods, at 43, is simply at a point where he can’t give his peers such a head start and be competitive.

And so it was that Woods returned to the competitive arena Monday and looked, well, kind of awful … at least for a few holes. At the par-3 third, Woods hit a short iron shot that spun off the front of the green, back onto a cart path and down a hill, leaving himself a touch shot back to the green that he hit long. Had he been playing for real, Woods would have made a double bogey on one of the easiest holes on the course.

But there was no anger, no frustration. Woods spent the day smiling and needling McIlroy, Matsuyama and Day. He did on-course interviews, stood for photographs and generally looked and seemed healthy.

And at this point, that is the most positive aspect to Woods’ return. He acknowledged Monday that the knee surgery he had in August was something he meant to do a year ago, but put it off after winning the Tour Championship. After capturing the Masters, his knee slowly got worse, to the point that it was difficult for him to squat and read putts.

He said the knee pain and uneasy walking led to other issues with his back. He also withdrew from a tournament with an oblique injury.

Perhaps this is the explanation for Woods looking out of sorts for most of the summer. Why the back stiffness and unsteady gait led to some unseemly scores, especially for the Masters champion. And maybe it is why he seemed so at ease Monday, knowing that things are on the right path.

Gradually the golf improved. Woods hit a lot of nice shots. He made a few birdies and captured those five skins. There was some decent length off the tee.

Woods should be in no hurry to perform after a nine-week break that included the knee surgery and a return to serious preparation only a few weeks ago. But there is some sense of urgency as it relates to the Presidents Cup and being a playing captain. Woods knows he needs to show some positive form this week to make picking himself a legitimate move — one that he gave more credence to Monday than he had during the latter parts of the 2019 season.

“I’m one of the guys who need a pick,” Woods said, smiling. He will make that decision in two weeks, and then has another month to prepare for the Hero World Challenge, followed by the Presidents Cup.

“I’ll be in Australia whether I’m playing or not,” he said.

The key once again for Woods is patience. He’s done a good job with that in his comeback from spinal fusion surgery, and recognized he had pushed too hard in 2018. This year he cut back, somewhat out of necessity.

Woods would love to have a good week at the Zozo Championship, but chances are more likely that it will be a middle-of-the-pack-type finish at the 78-player event with a $9.75 million purse.

It’s already been a busy few days for Woods in Japan, without a lot of golf to show for it. Tuesday might have been considered a good day to really grind on his game, but a poor weather forecast has Woods all but certain to stay away from the course. That leaves Wednesday’s early-morning pro-am as his last chance to get ready for his first tournament of the new season.

Is that enough? Probably not. But four rounds without the troubling signs of the summer should be enough.